Let’s Give Away Some Squiggums 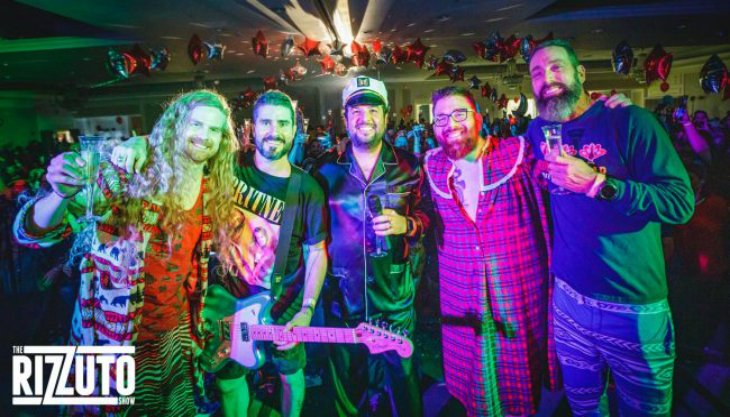 Potholes Are Being Plugged with . . . Phone Books? – LINK

Chris Rock is going back out on tour for the first time in 5 years. The North American leg of the Ego Death World Tour 2022. We are getting a date in St. Louis. Stifel Theater Saturday June 11th. Tickets On Sale Starting Friday, February 25th at 10 am at Ticketmaster.com (LINK)

Writer and stand-up comedian John Mulaney is coming to St. Louis this summer. Enterprise Center on Friday, July 22. Tickets for the St. Louis show and all other dates go on sale Friday, Feb. 25 at 10 a.m. (LINK) on Ticketmaster.com. There is a pre-sale event at 10 a.m. on Wednesday, Feb. 23

Good stuff from Rosie O’Donnell… She was out to eat and was seated by Nick Jonas and his wife Priyanka Chopra. She of course has to say hi. She compliments Nick then tells Priyanka Chopra that she know’s her dad. Priyanka says who’s my dad? Yep Rosie assumed her dad was Deepak. Turns out nope. Chopra is a common Indian name. She of course apologized on Tik Tok. Here is the audio but listen to the very end. Does she make it worse? Priyanka’s dad’s name is Ashok and he actually passed away in 2013 and was a doctor . . . Deepak Chopra is a famous writer and backer of alternative meds (LINK)

The “Oscars” are trying something a little different this year.  They are going to present eight awards you don’t really care about BEFORE the actual live broadcast . . . then edit them in. The categories affected are:  Documentary Short . . . Film Editing . . . Makeup and Hairstyling . . . Original Score . . . Production Design . . . Animated Short . . . Live Action Short . . . and Sound. The Academy says they’re doing it to, quote, “provide more time and opportunity for audience entertainment and engagement.”  Which is code for making the show LESS BORING. But they promise that all winners will, quote, “still have [their] celebratory ‘Oscar moment’ they deserve.”

It feels like we still don’t know exactly what’s wrong with WENDY WILLIAMS, or how serious it is.  But her producers have decided not to wait around any longer. SHERRI SHEPHERD has officially been named her replacement.  She’ll take over Wendy’s timeslot in the fall with a new show called “Sherri”. Wendy’s rep CLAIMS she understands their decision.  But after he said that, Wendy posted a message saying she never authorized him to speak about it (LINK)

Kevin from “The Office” is famous for his chili. And for spilling it.  If you’ve ever wanted to make Kevin’s chili for yourself, now you can.  Because there’s an official recipe . . . and it’s hidden in the Peacock streaming service’s terms of use section.  The boyfriend of TikTok user McKenzie Floyd figured this out somehow, and she posted a video of herself scrolling through it on her TV. You can also find it on Peacock’s official site.  Just go to the bottom of the page and click “Terms of use (LINK)“.  You’ll find it under heading #9, “Third-Party Authentication; Third Party Services.” Maybe this is a way to get people to actually READ the terms of use?  If so, it’s not a bad idea.

“Classic Rock (LINK)” magazine, which now goes by the name “Louder Sound”. Here are the Top 20:

Not all songs were created equal and not all songs can stand the test of time.  BuzzFeed opened a poll about some “modern day classics” to see what people think will stay a classic in 100 years.  Here are the highlights:

The mom from Home Improvement, Patricia Richardson is 71

Today’s birthday girl has been in 388 fine films, including: Last night the Blues were in Philly.  During this road trip – up until last night – the team was 3-1.  And, with a 4-1 win, the team finished up the road trip 4-1.  Goals from Brayden Schenn, Vladi Tarasenko, Ivan Barbashev, and Brandon Saad all helped the Blues on their way to the win.  Up next?  A game on Friday against the Sabres at home.  Puck drop is scheduled for 7PM.

We were all left in shock after the photographer Kelly Smiley fell off the stage at the Rams’ Super Bowl celebration while trying to take a picture of Matthew and Kelly Stafford.  After the fact, Stafford received criticism for walking away and leaving his wife Kelly to handle. However, we did learn that the Stafford and the Rams organization covered all of the hospital costs for Smiley who fractured her spine, and paid for the cameras that broke after her fall. On Tuesday, Matthew and Kelly discussed the situation.  Stafford’s wife said: “There was a photographer who stepped off the back of the stage… had asked if we wanted a picture and I was like, ‘yes,’ because looking back at my camera roll, I have literally zero of Matthew and I. When she offered, she stepped back and fell. And it was an awful, awful moment. Matthew looked at me and said, ‘Check her please,’ and turned around.” She continued: “We followed up with her the moment we got in the car. Matthew actually looked at me and said, ‘hey, will you contact the Rams, ask how she’s doing?’ We did that, they’re like, ‘we think she’s going to be okay.’ Kelly also added that after the photographer revealed that she had fractured her spine, Matthew texted her himself to check-in. Matthew then responded to his confusing reaction to the scary scene: “Yeah, I mean, that obviously happened really quickly and suddenly and unexpectedly, and I wish I had a better reaction in the moment. One of those things you try to train your reactions to be a little bit better next time.” He also said he apologized to Smiley.

A super-rare Kobe Bryant card just made a fortune on the auction block selling for a staggering $2 MILLION!! The card is a 1997-98 Metal Universe Precious Metal Gems piece and it’s one of the rarest Black Mamba cards in existence. It’s numbered to 100, although only 10 of the emerald version were ever made, and with an 8.5 grade, it’s still in ridiculously good condition. Officials say that the historic sale went down last week saying it set an all-time record for a Kobe card. The front of the card features a still image of a young Bryant donning his #8 Lakers jersey passing the basketball with flair. The back of the card displays his stats from the ’96-’97 season.

In his dismissal by the Miami Dolphins last month, coach Brian Flores declined to sign a separation agreement presented by ownership. He said: “Just signing that separation agreement would have really silenced me.” By not signing the separation agreement, Flores left millions of dollars on the table. But not signing also granted him the freedom to talk about his treatment in Miami.  The Dolphins say otherwise: “This latest assertion by Brian that mentioned an NDA to him is categorically false. This just did not happen and we simply cannot understand why Brian continues this pattern of making unfounded statements that he knows are untrue,” the team said. “We are fully cooperating with the NFL investigation and look forward to all of the facts coming out which we are confident will prove that his claims are false and defamatory.”

Day 2 of in-person meetings Tuesday between Major League Baseball and the MLBPA once again produced little progress toward a new collective bargaining agreement while the league actually viewed the negotiations as a step back. League officials met with counterparts from the MLBPA, along with a group of players, for about three hours. Like Monday, the sides met together and then on their own but little came out of the negotiations. In fact, the league brought up the idea of using a federal mediator, and for the second time in two weeks, the union shot it down. The sides will meet again today as spring training remains on hold until a new collective bargaining agreement is reached or the owners decide to lift the lockout. A deadline to play on Opening Day is approaching.

The U.S. Women’s Soccer team reached an agreement to end their battle with the U.S. Soccer Federation over equal pay. Players will split a $22 million settlement, which is about a third of what they had sought in damages.  Another $2 million will be set aside to benefit players in their post-soccer careers, and to help grow the sport for women. The USSF also committed to providing equal pay for the women’s and men’s national teams, including World Cup bonuses. MEGAN RAPINOE said, quote, “For our generation, knowing that we’re going to leave the game in an exponentially better place than when we found it is everything. That’s what it’s all about because, to be honest, there is no justice in all of this if we don’t make sure it never happens again.”

Phil Mickelson is no longer sponsored by KPMG after his recent comments regarding Saudi Arabia. “KPMG U.S. and Phil Mickelson have mutually agreed to end our sponsorship effective immediately. We wish him the best,” the organization said in a statement. Speaking about the Saudi-backed Super Golf League, Mickelson has said that he might be willing to overlook human rights issues in order to gain “leverage” on the PGA Tour. He said – and I quote – “We know they killed a Washington Post reporter and have a horrible record on human rights. They execute people over there for being gay. Knowing all of this, why would I even consider it? Because this is a once-in-a-lifetime opportunity to reshape how the PGA Tour operates.”  The apology that Phil put out – really didn’t apologize all that much and you can see it on the blog…he just pretty much stressed that he needs: “time away.”  And that the game of golf as we know it needs some adjusting.   A few other sponsors have either said they were reconsidering or have already dropped Phil.

And finally – Mizzou and SLU basketball were both in action last night.  Mizzou lost to 17th ranked Tennessee 80-61.  They take on LSU on the road on Saturday.  SLU beat St Joseph’s 72-61.  Their next game is on the road FRIDAY against Richmond.  And Illinois is off until tomorrow